The Wonderful World of Color 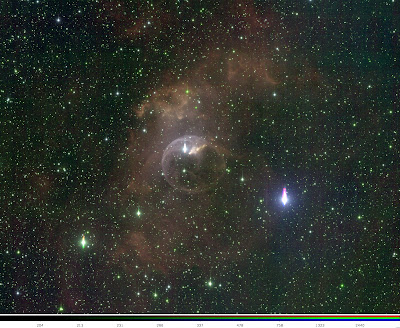 During the final days of Engineering Verification, we took a three-color (gri) dither sequence - that is, a set of 9 offset exposures in each of these three bands to produce a color image.  The object was the Bubble Nebula (NGC 7635), and I posted a single band image in a previous blog entry.  Now that we are working on the pipeline, it is our intention to produce a nice color image to advertise the capability of pODI.

Well, Ralf Kotulla, our commissioning working group observer from U. Wisconsin, beat us to it.  He took the 27 images, used swarp to align and combine them, and produced this nice color image.

We are working on an "official" version of this, and we'll post it when it's ready, but this gives you and idea of what nice images pODI will produce.  Thanks, Ralf.

Last night ODI took several images of the comet 168P/Hergenrother. The image shown below is a single exposure in the r' band and covers an area of about 1x1 arcminutes (one OTA cell). 168P is a special case of a comet, as a few days ago a fragment broke off the main body, as can be clearly seen as the fainter spot below the comet. 168P is continues to break apart, and is actively being monitored by various research groups. See, e.g., this JPL press release.

To the right of 168P a streak of a star is visible. Since the comet moves at a different apparent velocity on the sky than the stars, we had to modify the telescope guider to actually follow the comet instead of the stars. Thus the star in the image is trailing. This different apparent movement on sky as compared to the distant background stars is common to all solar system objects (albeit to varying extent), and is a combination of the proper motion of earth itself and the orbit the solar system object.

We achieved following the comet (called non-sidereal tracking) by modifying the ODI guide module: This module uses the video signal of a bright star to send corrections to the telscope tracking system should a star wander of its ideal position.  For the non-sidereal guiding we added a drift rate to the "ideal" star position, thus constantly pushing the telescope tracking system to follow the comet's motion.

Note added Nov 1st: In this image, west is left, north is up.

This is gonna be technical...

... but I promise there will be a pretty picture at the end. And a pony.

We continue to test the Mosaic filter adaptors to use narrow band  (and other) filters, where in the center we place the filter of interest, and above the outside detectors there are cut outs to allow guiding the telescope. The cutouts are covered with clear glass to ensure they are parfocal with the science target area.

The dilemma is now that the clear glass lets so much more light pass than a narrow band filter, and scattered light can make its way to the central detector array. The image below shows a flat field simultaneously using the small H-alpha and the large ODI z'-band filter. Why two filters? By combining a z' and an H alpha filter, the central area under the narrow band filter should not receive any direct light. The outer detectors with clear glass in the filter module should see the equivalent of a flat field taken in the z' band.

One can clearly see the three well illuminated outer devices (a level of about 40000 electrons).  Zooming into the central 3x3 area below, we can see that some scattered light is making its way there, while under ideal circumstances we should only read noise. The level in the central array is about 0.5% to 1% of the level in the outer detectors. This scattered light will ultimately constrain the flat field quality for narrow band imaging with ODI, and we might need to opt for neutral density filters, or roughly color-matched glass inserts to cover the outer detectors instead of using simple clear glass. We expected to see such stray light, but for a first feasibility test, clear glass was cheap enough and works well for now.

The next image shows a false color image of a genuine, H alpha-only flat field of the central 3x3 detector array. The scaling is such that red is near 100% illumination, green is around 50% illumination, and dark blue indicates near zero throughput. Thus, a substantial fraction of the central imaging array will be useful with narrow band filters.

Which finally brings us to the pretty picture that I have promised earlier: A 300 second exposure in H alpha of the horse head nebula, bias, dark, and flat field corrected. See? A pony!

This week of commissioning started with Charles and Brent spending an entire day mounting reshuffling the large ODI filters and installing five new filters into the ODI filter mechanism. With the addition of four narrow band filters, and one SDSS u' band filter, all nine slots in ODI are now occupied. The new filters are 5 3/4 inch sized filters loaned from the KPNO and CTIO Mosaic cameras, so we do not get the full field of view. The canonical choice for the narrow band filters included an H alpha and O[III] filter – expect some nice images to show up over the new few weeks.

Monday night Ralf Kotulla (UW Milwaukee) took a first demonstration picture of M33 in H alpha, which nicely complements last run's U band image taken of the same galaxy. In the picture below we show only the unvignetted 2x2 detectors array. The total field coverage is slightly larger, though.  The exposure time of the single image was 450 seconds, but we observed the frame as part of a larger dither pattern. I cannot wait to get a full color image of M33.

This is night 3 of science commissioning, and I decided to come up and sit with Tod Lauer and Steven Janowiecki for part of the night.  We have had some filter inserts made (by the University of Wisconsin machine shops) to hold the 5.75 inch square CCD Mosaic filters, and they just came in yesterday.  They need to be black anodized before we really use them, but Daniel and I couldn't resist borrowing one and asking Charles to put the QUOTA u filter in.  These inserts hold the filter over the center of the 3 X 3 science field (and give you approximately 20 arcminutes square unvignetted), and they also have holes over the outer OTA fields and the focus sensors.  Here is a drawing: 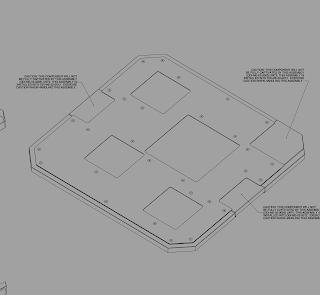 We have to put optical glass in the holes over the outer OTAs so we have in-focus stars to guide on.  We elected to start with clear glass for these, but we may want to switch to red or blue glass to limit the bandpass and improve the image quality later on.  We also had aluminum "filters" made in case we want to block off any of these holes, and we decided that for this experiment we would put one of these into the hole closest to the science field to eliminate scattered light.

So, here is the first report about the u filter.  First, it is a Johnson U - central wavelength 3640 A and width 800 A - redder and wider than the SDSS u band.  Since all the other filters are SDSS bands, we won't be able to do real photometry with color term corrections.  However, the very simple things we can do are instructive.  First, focus.  It's quite windy tonight, and the seeing is poor.  But, to the extent that we can tell, the focus in u is close to the same as the focus in g. We do have a SDSS u filter, and we will put that in soon and redo some of these tests.

Second, the sensitivity through this filter.  We took a frame in Stripe 82 and analyzed a single star in terms of its SDSS u magnitude.  We can calculate a zero point, 24.7,  which is the magnitude that produces 1 count per second at airmass = 1.0  The sky has about 1.7 counts per second per pixel corrected to the same airmass of 1.0  Putting all these numbers together, we can calculate that a u=23.4 magnitude star will give a 10 sigma measurement in 300 seconds.

Finally, a picture.  Tod and Steven got some exposures of the central part of M33 in u.  Here's a quickly (and crudely) reduced 300 second exposure.  You can see we have some flat-field illumination issues, but other than that, it appears to process pretty well.  More to come. 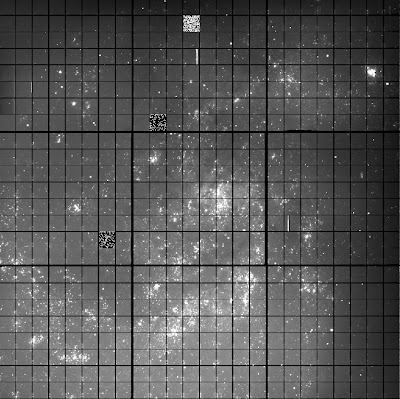 Getting ready for science commissioning

After a two weeks of an ODI hiatus, we are back at the telescope. We allowed ODI to warm up for some maintenance work, and today we spend most time on pumping the dewar and going through the cool down procedure.The heater to maint a stable temperature of 170ºK just kicked in an hour ago.

Andrey is spending the time to apply some software updates to further improve the capturing of telemetry data and to enable automated data transfer to the ODI Pipeline, Portal, and Archive (PPA). We will test the new updates before the end of the week to ensure we really made things ..... "better". However, we are somewhat limited in testing since we can operate only during the daytime. By 2 to 3pm we have to yield to the regular observers at WIYN.

Next week we will have the first regular scientific commissioning run for ODI, which is a change in our operating mode: Now observers from the WIYN community, but outside the ODI team,  take over and help with the performance characterization of ODI. This will also be an exciting time for all of us.

I finally managed to get the full ODI installation time lapse video online; Pete Marenfeld edited this final version, and it looks really good. It is hard to imagine that more than two month have passed since that movie was recorded.

ODI-installation15FPS from Daniel Harbeck on Vimeo.
Posted by Daniel at 2:42 PM No comments:

The last night of engineering verification I was thinking about what the full focal plane version of ODI would be like.  We now know that even in non-OT mode, the instrument can produce images better than 0.4 arcseconds over its full field.  We know how to make detectors that will work fine in  static and coherent modes.  And so I produced this image of M33.  It's a five minute exposure in the r band.  It is 63 arcminutes wide by 65 arcminutes high.  The corner chips have been used for guiding, allowing us to remove telescope shake and some fraction of the ground layer seeing.  The screenshot doesn't do it justice.  Even the 30-inch display doesn't do it justice. 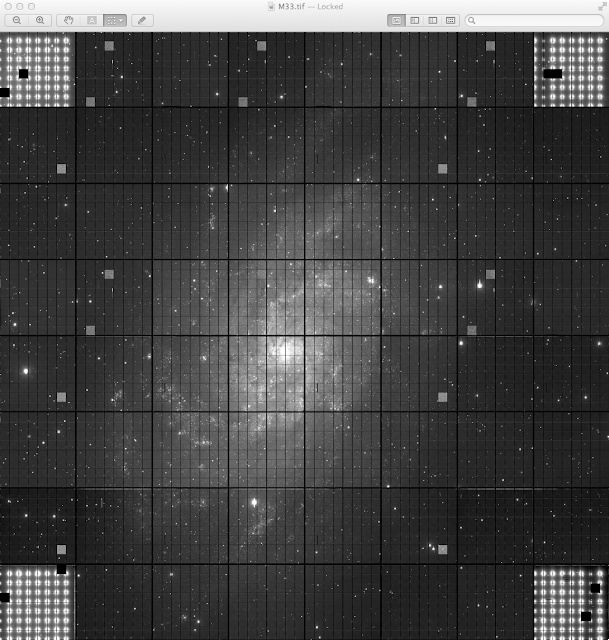